Wow some whopping updates are in order! The holidays came and went–December was really a whirlwind for me with a baby and so many things going on. Rose went to see The Grinch in San Diego with Grandma and Aunt Marilyn and Jo and Beverly, and wore her reindeer antlers the entire time. She had an amazing night! 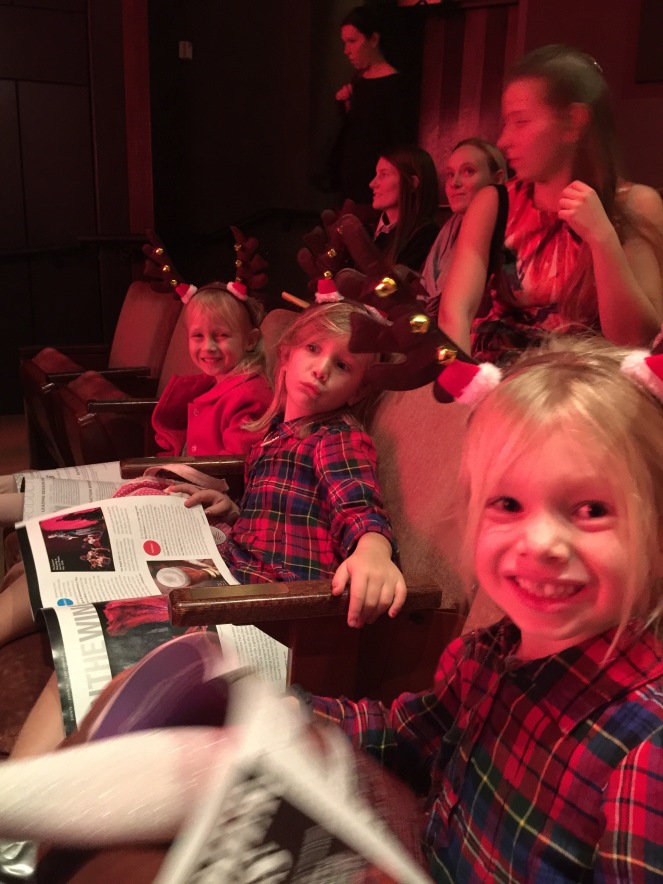 We had Thanksgiving the next weekend at my mom’s house. We spent a few days there and had some family time. Berrett got to meet his namesake for the first time. 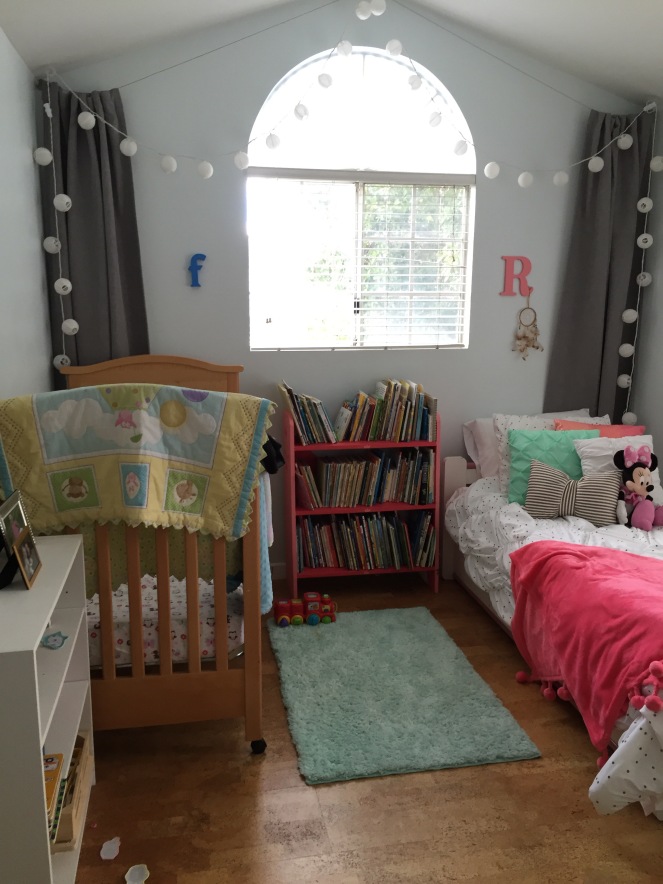 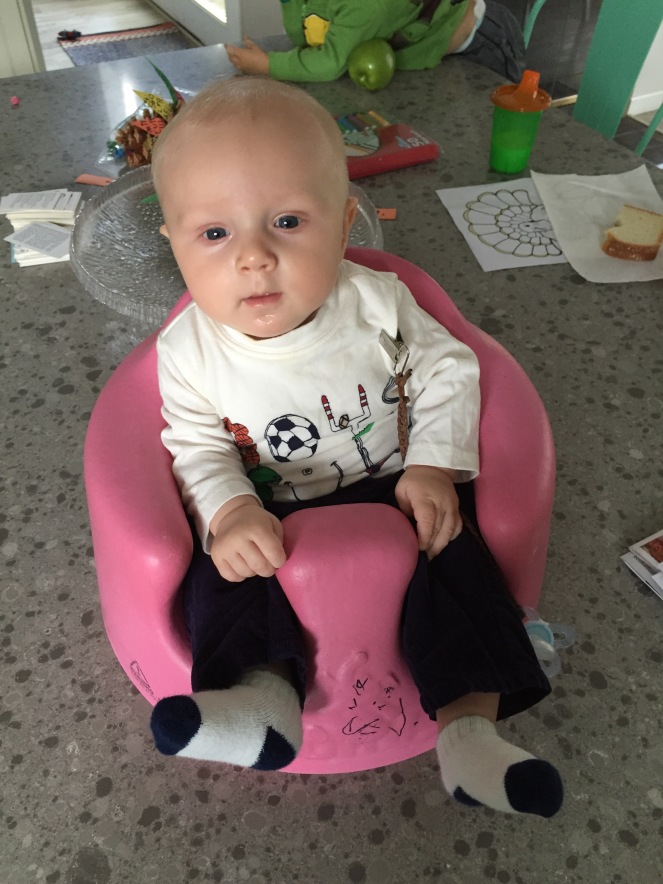 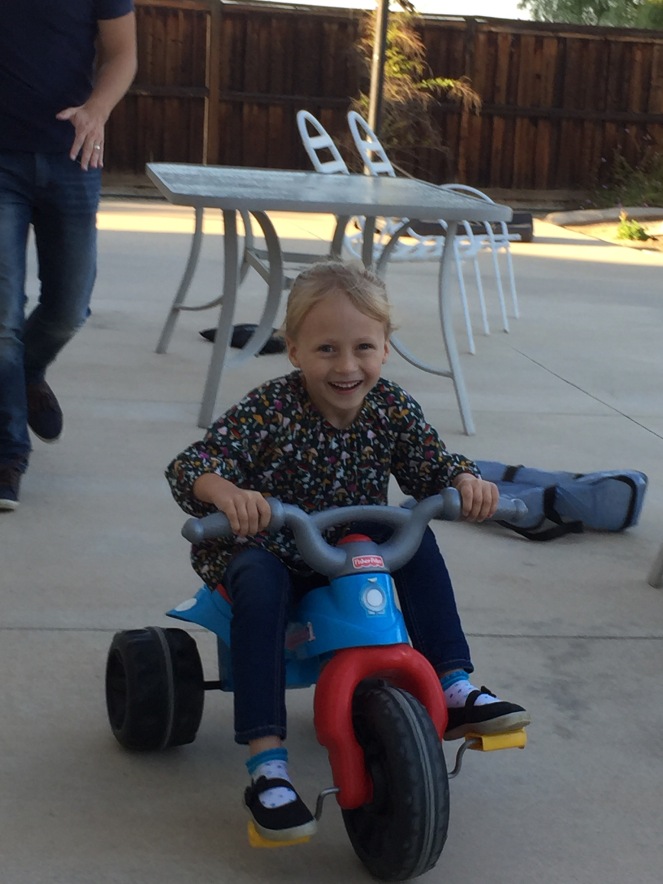 When we came home we went out and got our Christmas tree (super early in the season!) We got our tree from Home Depot and it smelled great and lasted all through Christmas…it was pretty crispy by the time we threw it out a couple days ago! Raimo and I had our usual spat about tying it to the roof of the car, he trying to do it correctly and safely and I trying to just get it done because hurry the baby’s crying and we only live 10 minutes away! Anyway, Rose was very excited about decorating the trees this year (we put up our white one too). She wanted to get to work first thing the morning after we got it all set up.

Some more pics of a clean house 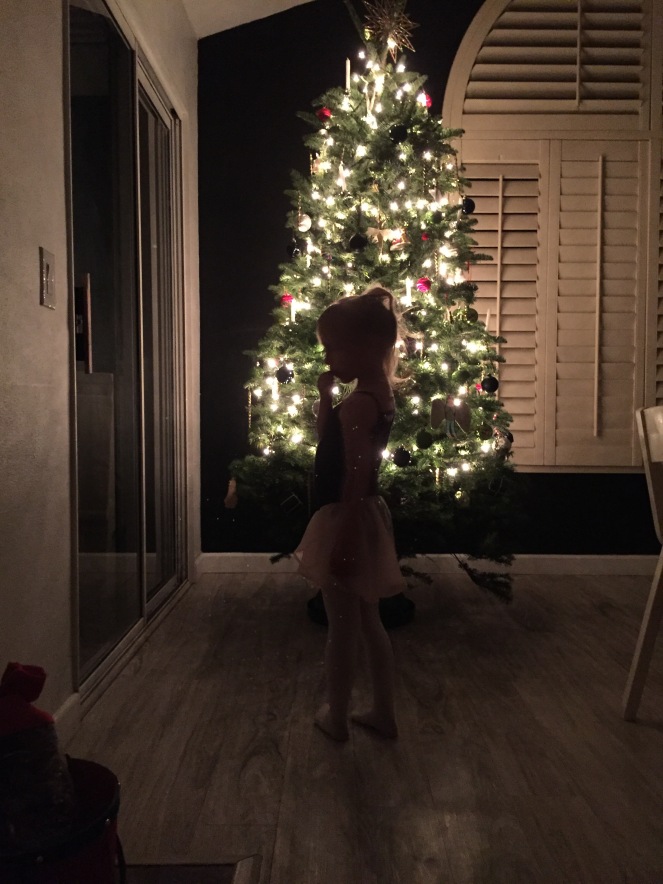 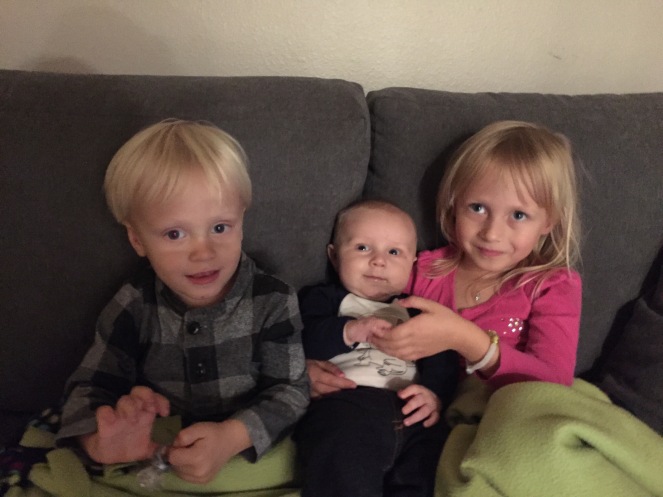 Berrett turned 4 months on December 16th. He has continued to be a delight to his siblings, to family, strangers, and expecially me. He gives a big smile to all who meet eyes with him. He has shifted from napping so much in his swing to napping in his bassinet where it is a little quieter. He is extremely interested in the world around him, grasping for anything within reach and touching what he can see. He likes to touch my necklaces, toys, the plates of food on the table, anything near his bumbo on the kitchen counter. His arms still bat up and down and a few times the kids and he have done it back and forth like a game: he watches them do it, and then he excitedly copies them. 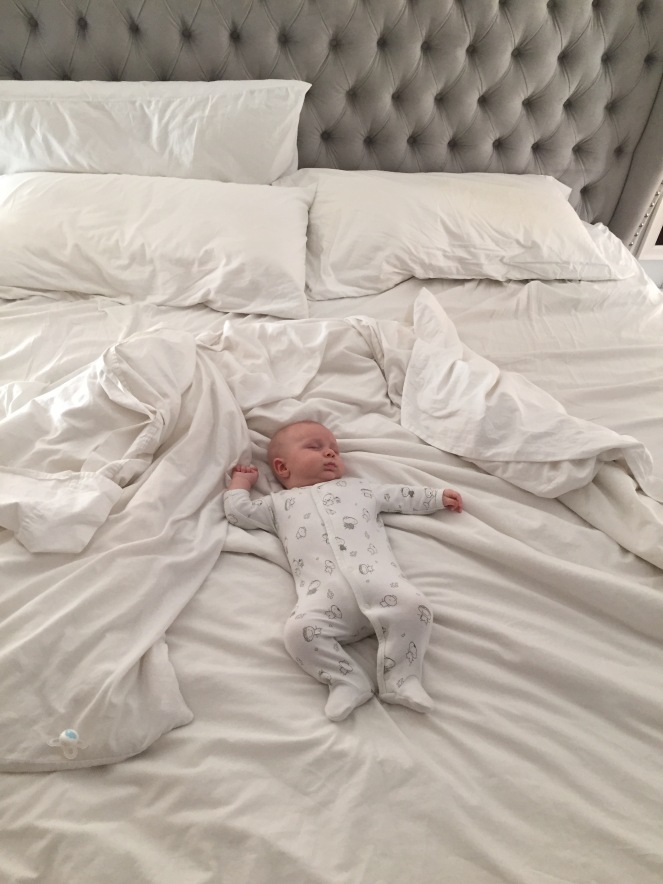 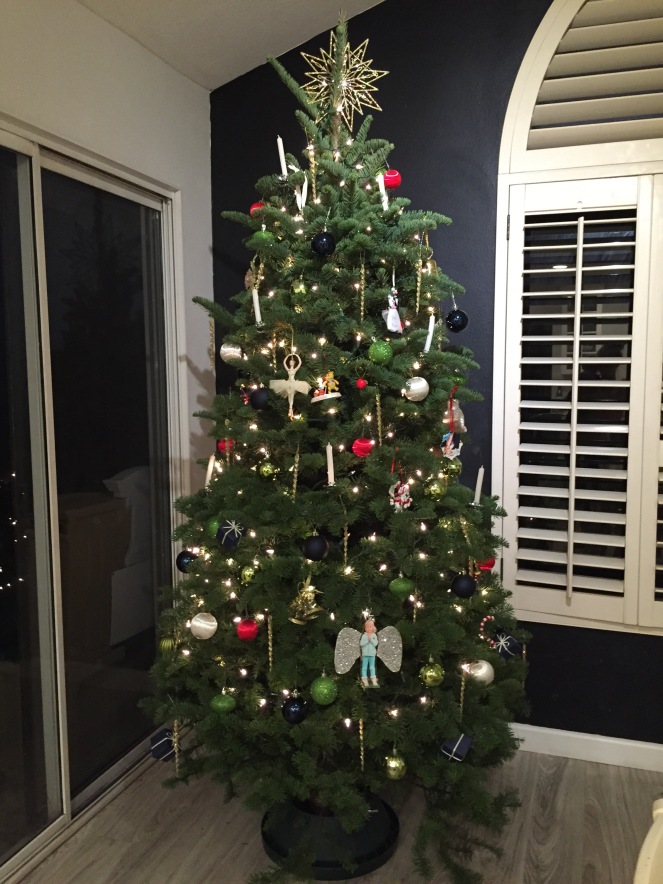 I’ve tried to instigate a clean-the-house-on-Saturdays initiative more out of necessity than anything. Raimo will take the kids out front and wash the cars or sweep the back porch and I will tackle one or two jobs, do dishes, and pick up the clutter. This month I finally cleaned the oven, which looked like it had had a lasagne turned upside down inside since we moved in. THAT was a nasty, chemical job. I also got the stair railings wiped down because they were really dirty. The floors usually have to be done too. Keeping up house is a lot more work now that the kids have a lot more square footage to make messy! I have also found it pretty hard to get much done having hit the mark of the third child. While there is always about 6 months of transition time after a baby, with #3 I feel like laundry has tripled, more humans need things from me every minute, more snacks need to be fixed, nightly dinners need to be made because they are all starting to eat more, toys and clothes are everywhere. It doesn’t make me feel down generally, but I do feel discouraged when I’ve been working hard all day and things are still a wreck. I have to get things somewhat in order just so we can go on living and eating and wearing clothes! I feel better when things are cleaned up. 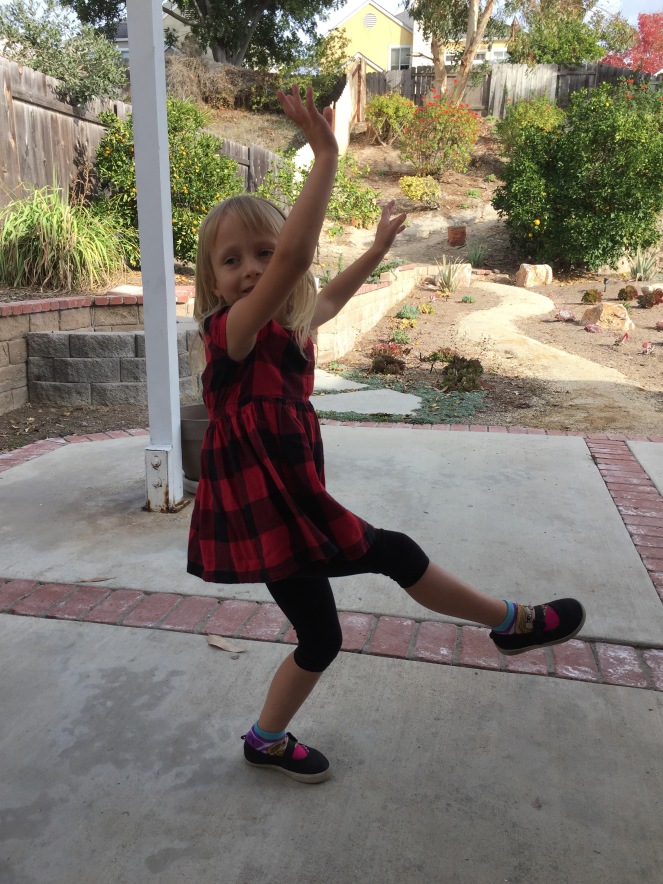 Dance party in the backyard. Berrett is stoked

December was overwhelming because I took on too much. I know I did, but it’s okay–it was all fun and part of the holidays. Just finding time to shop (even online shop) and get presents took a lot of time. But I got it all done and in the end it’s always fun to watch someone enjoy a gift you gave them. A new mantra popped into my head a couple months ago and it has kept coming back to me; Never suppress a generous thought. When I was headed out to see an old friend and had the thought that I should take her some baby oranges I almost didn’t follow through because it would take extra time to pick them. But when the baby was strapped into his car seat, I thought I would just follow through with that thought and ran to the backyard and filled a plastic bag really quick. Who knows if it mattered to her or not but I did it. Another time I thought I would take a small Dr Pepper to the woman I visit teach, but thinking it would be too small of a token, or too lame, I almost didn’t do it. But… never suppress a generous thought… I did it, and turns out it’s her favorite drink and she can only have it in small quantities for her health! Anyway, I have stopped myself from doing little kind acts too many times in life because of fear or thinking it won’t make a difference or thinking I don’t have the time! This month the church had  a #lighttheworld initiative which focused on one attribute of Christ each day till Christmas. It was such a beautiful way to get to know Jesus, and I felt guilty that I wasn’t able to give it more time and thought. However, my life isn’t going to get any less busy in the coming months or years and I figure learning to act on those thoughts that come into my mind will help me serve more like the Savior. (My service somehow always feels like scrambling, but I guess that’s okay!) 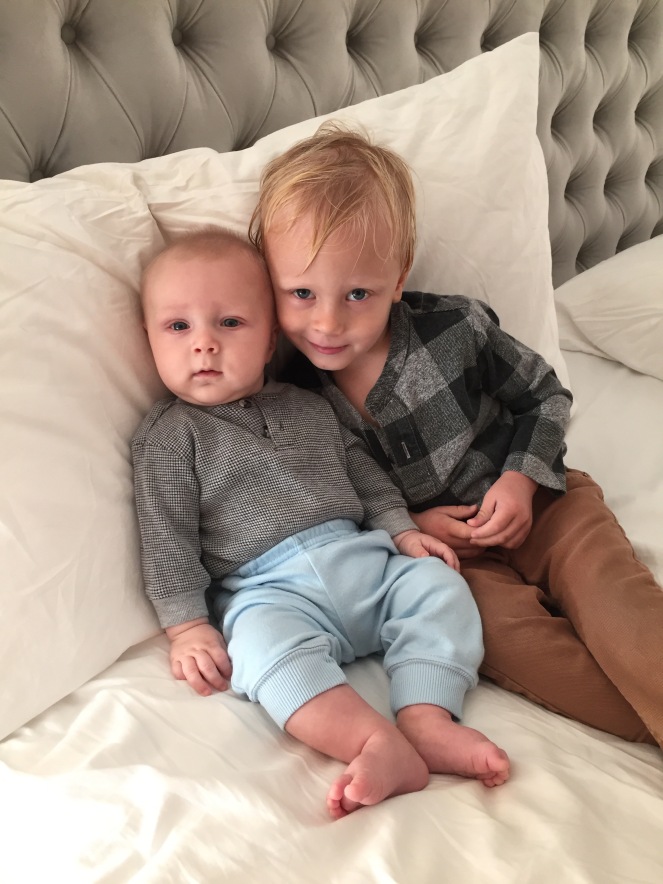 Finn said Take a picture of me and Berrett 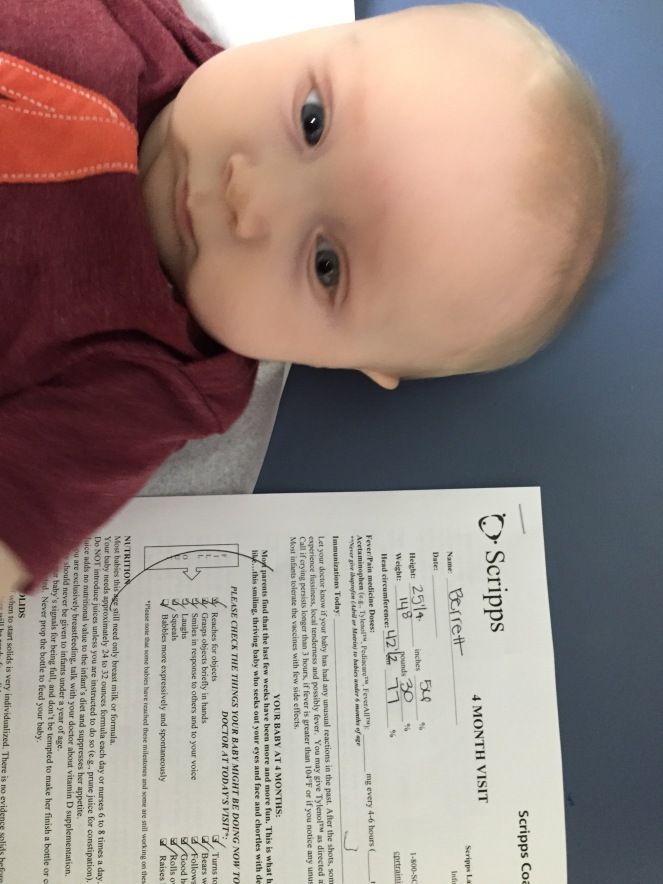 4month stats- big head and much taller than my other babies! 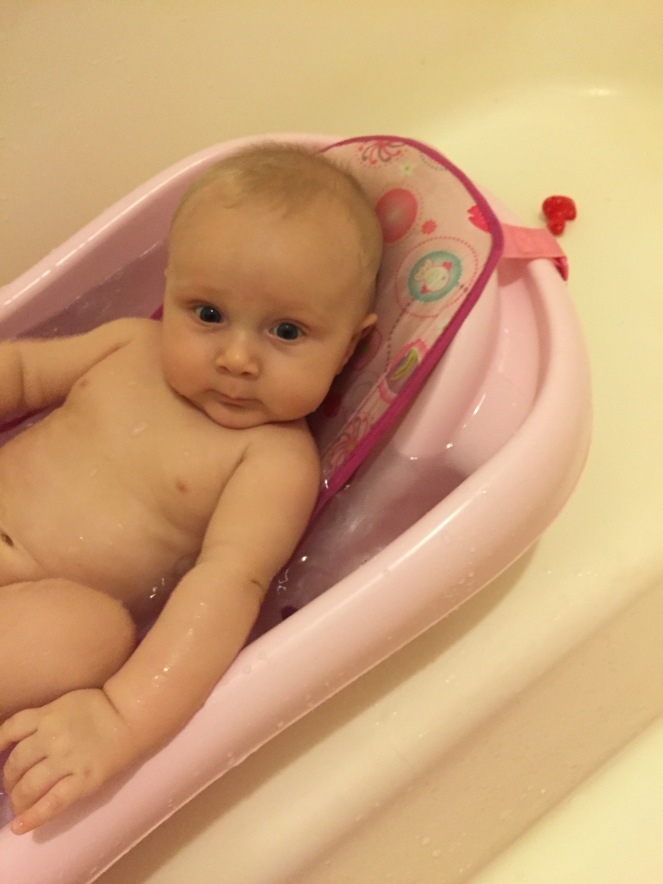 We had Grandma Joan and Aunt Laurie over for Sunday dinner one night before Christmas. 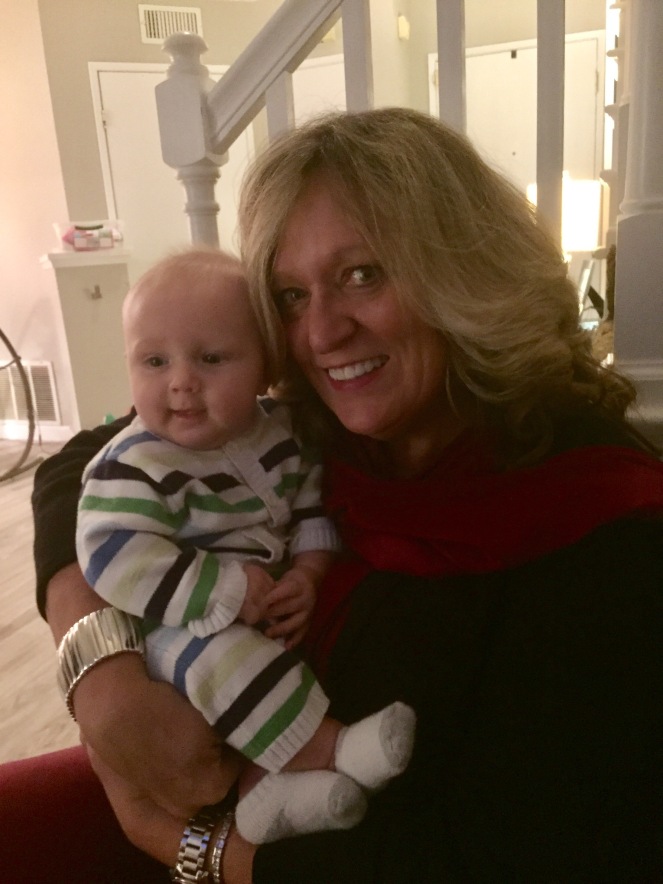 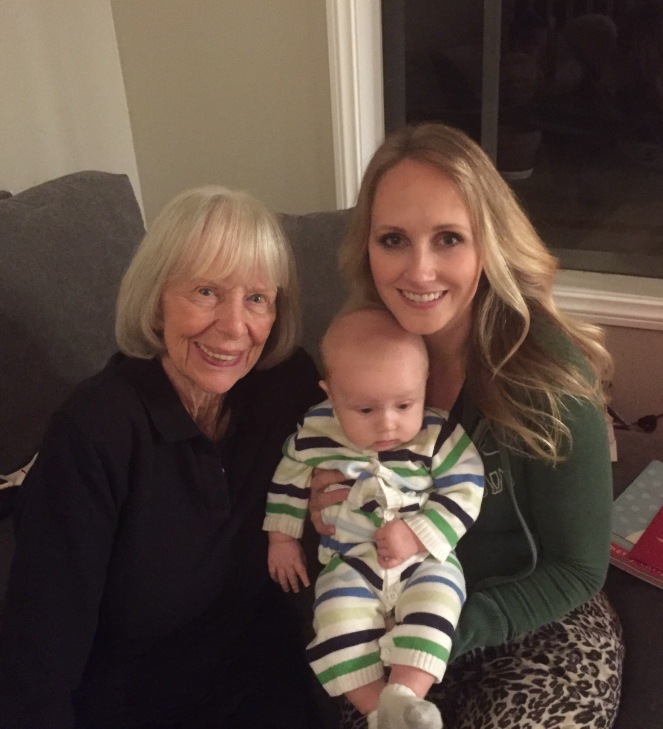 One thing I dropped this year was the holiday baking. However, the Christmas cards did go out, miraculously! It was a good two weeks of thinking about it and working on addresses, but it happened! I also wrapped presents as we bought them so I could get them under the tree early. I also got it into my head to make some handmade gifts and while I did run out of time for some of them, these trees turned out really cute and I know I will enjoy mine for years to come. Especially those little wrinkly feet up top!!! 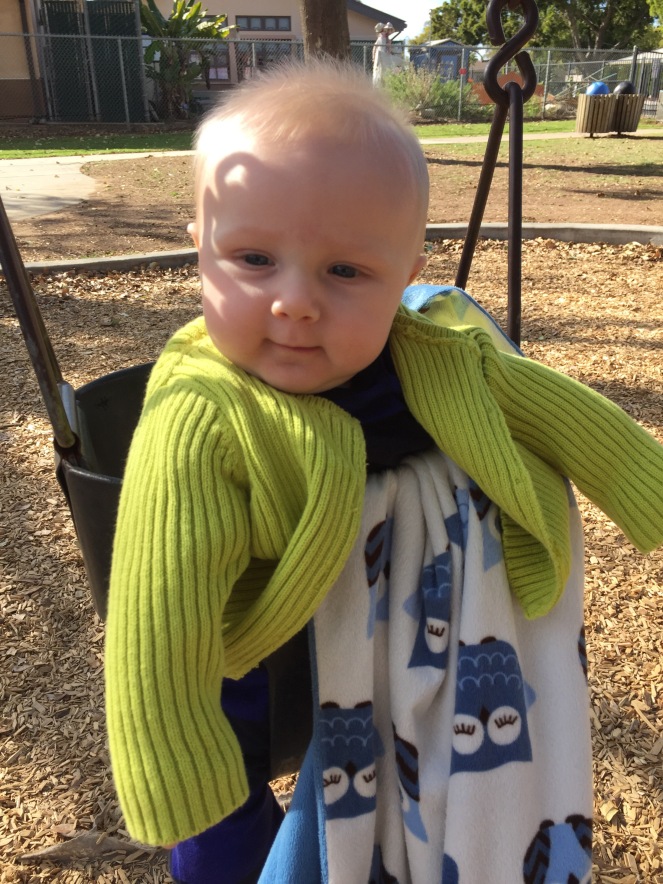 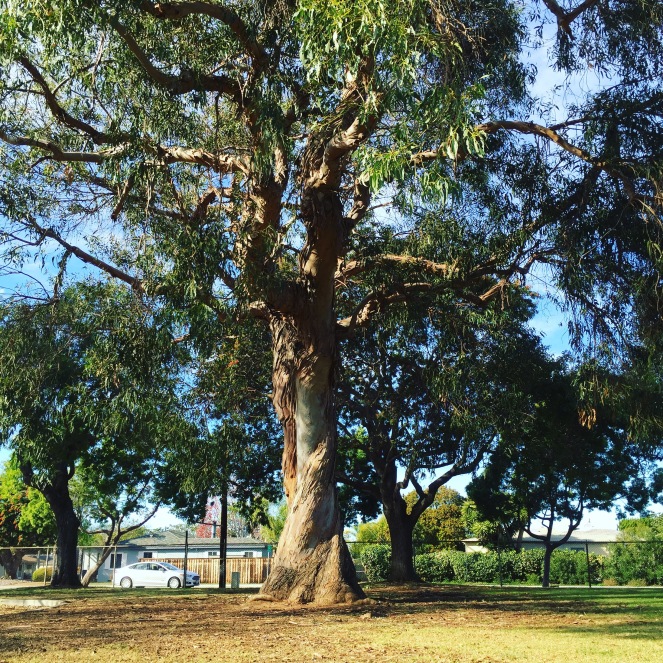 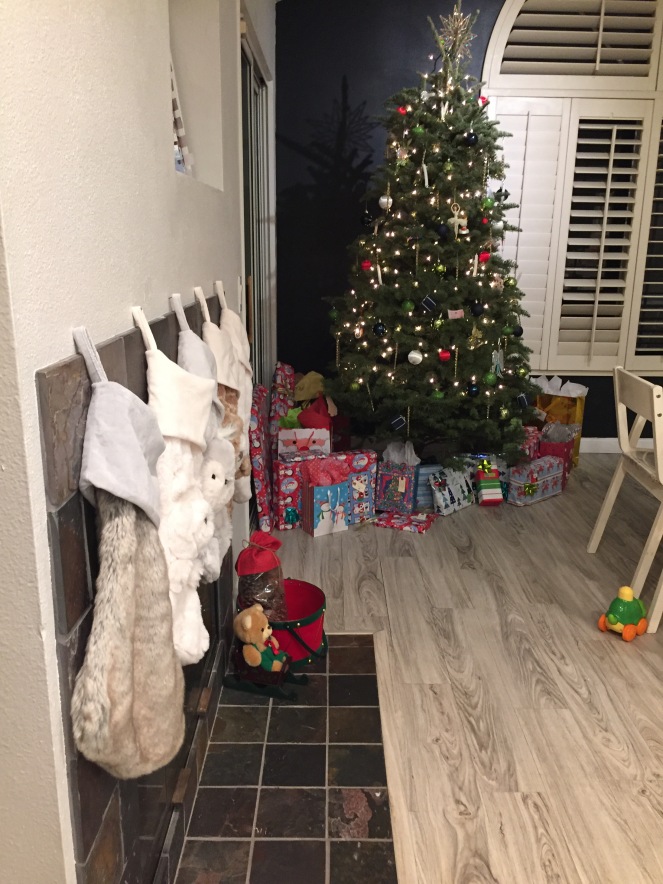 Finally got our stockings this year!!!! 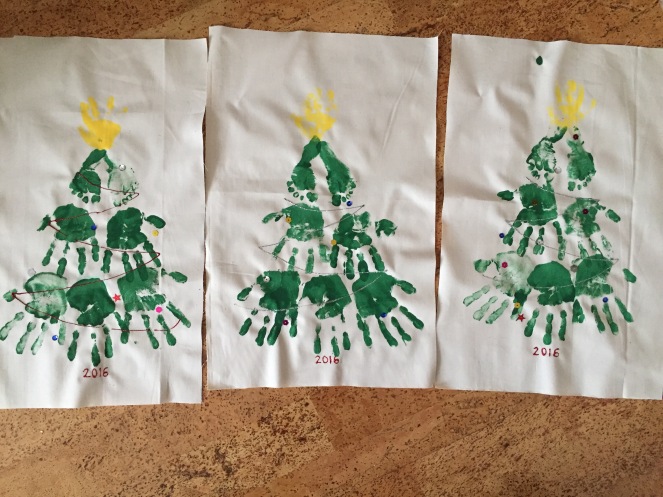 Here are some pics from a day when we didn’t have any plans and ended up getting Subway and taking it to a park. We were actually frustrated looking for a  good park (still getting to know our new city which apparently doesn’t have many good parks??) But it ended up being a memorable family day just enjoying some time outside together. Berrett sat in a swing for the first time and he thought it was pretty great. The kids were running on the grass under the trees and Raimo and I had a chance to talk and it was just happiness.