So I cannot let too much time pass before I write about a special occasion in our family… Raimo’s 30th birthday! Along with the trepidation he was feeling about hitting his 30th and subsequently becoming “old,” I knew he was secretly hoping for some kind of fanfare or celebration for this big birthday. I thought it would be fun to plan a surprise for him. I considered a few options, but decided on a kid-free getaway to LA since he has never been there before (and I have not been very often even though I grew up just a few hours away.) I randomly checked to see what would be playing at the Pantages Theater, and was surprised and delighted to find that Phantom of the Opera would be playing there ON his birthday! I thought about it for a few weeks and tried to feel it out with him, asking, “If you could see any show in the world what would it be?” and “If you could choose between the symphony and Phantom of the Opera, what would you choose?” I’m not sure if he was on to me or not, but I kept the surprise all the way up to the very day. I did slyly suggest that he take the day off work and possibly the day after and we might do something with the kids. The day before his birthday, Raimo and I went to teach a ballroom masterclass for the community theater, so I dropped my kids off with my mom in the morning (at Newport Beach). We taught the class together, which went really well, and had a good time dancing together sans kids. Afterward we went out for Mexican food at Norte, one of our favorites, and looked out at the sun setting over the ocean. It was mostly nice to have a chance to actually talk to one another. I remember we just had so much to say, like we hadn’t seen each other in a while. We even walked on the beach a little bit.

The next morning when we woke up, we showered and got ready and I sort of implied we were going to get the kids from my mom’s. But I drove the car and took us up the 5 freeway instead, and he sort of caught on that we were headed somewhere else. Hours later (!) we were in LA and arrived at the Getty Museum! This was supposed to be our first activity, but the parking was totally full and they sent us away! I was so mad that the day didn’t go seamlessly, but instead we went and walked along Hollywood Blvd. 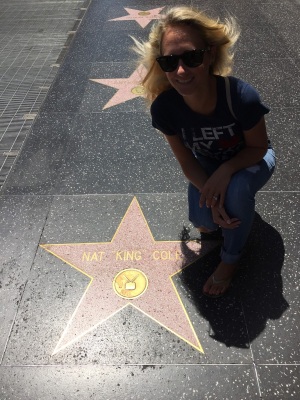 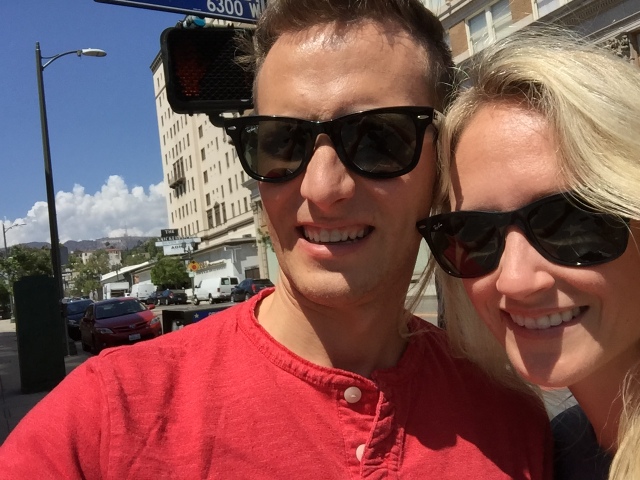 It was way too hot to be doing this, but oh well. 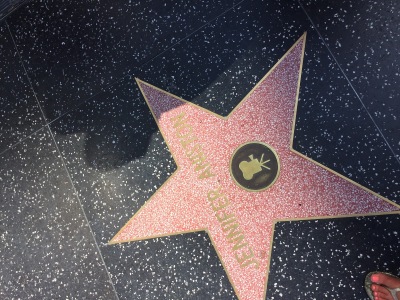 Frank Sinatra had like 4 stars! We didn’t realize you could have them for different things: film, television, an album, theater, etc. 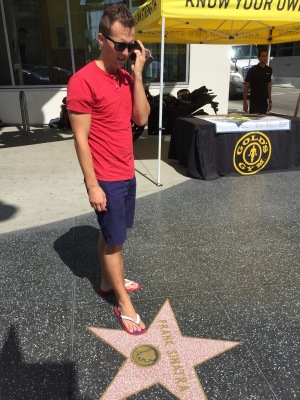 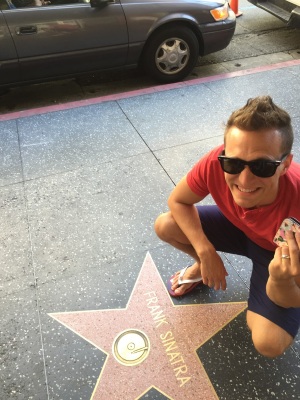 I was surprised to see this one. Cool! (he wrote Music Man)

We passed the Pantages while on our walk, so I took that moment to pull out the tickets for our show that night. Raimo didn’t have much of a reaction as I hoped, but that’s okay because I know he shed a tear or two during the show later that night. It was his first time seeing it, and it was pretty mind-blowing. Chris Mann played the Phantom, and at first I was disappointed to read he had been on The Voice, thinking it would be more of a pop or rock take. But boy was I wrong! He was really wonderful–must have had a lot of opera training! I liked his take better than the other versions I’ve heard. Christine was really wonderful as well. her name is Katie Travis, and she was really petite and had a very beautiful voice, and she had similar qualities in her voice to both Sierra Boggess (25th Anniversary) and Sarah Brightman, I thought. It was really really nice. And it was cute that she was little. At one point when the phantom is singing, he picks her up and just keeps belting it out like it ain’t no thang trying to sing while carrying a woman. I wasn’t thrilled with Raul–his songs are so amazing, but I didn’t feel much emotion from him. he just kind of stood there and sang. They did some new things with the set–the way the stairs appear out of the set as they descend into his lair. It is just thrilling and so cool. It made me want to be Christine so badly!!! 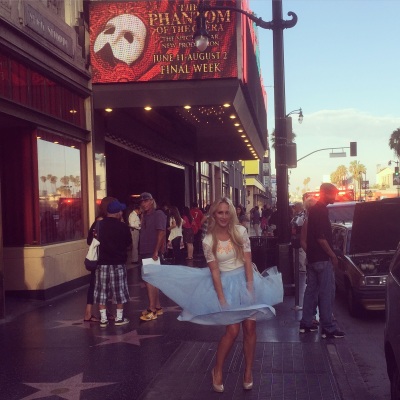 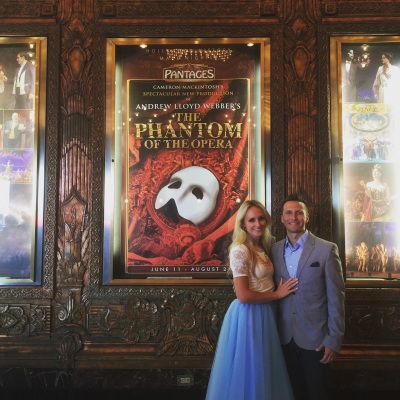 I was really excited for Raimo to experience that theater because it is just so gorgeous. Look at all the detailing and the blue ceiling!

That night we slept in a hotel just a few streets away. It was in a crappy area… I think Raimo was pretty unimpressed by how filthy LA is and by the crowds and terrible traffic. But we survived, and we went for a drive in the morning through Beverly Hills. We checked out some of the beautiful houses.

And we finally made it to the Getty. We were amazed by the beautiful architecture and grounds alone.

It was a gorgeous day.

I really loved seeing all these old Bibles. They were all printed by hand! Such amazing artistry and workmanship! I can’t believe they’ve survived! They all were bound in these really industrial hard covers, so maybe that’s it. 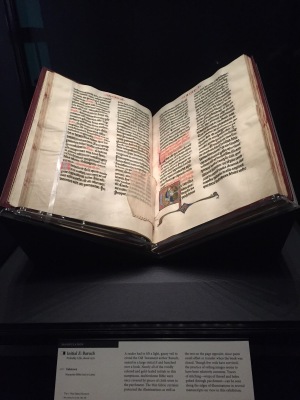 Those knobs are attached to mark the most important passages. Look at those colors! 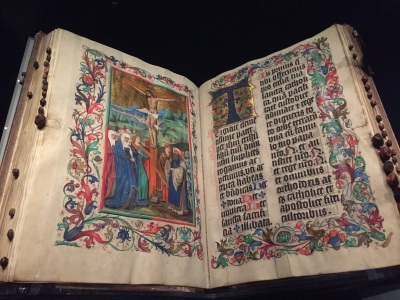 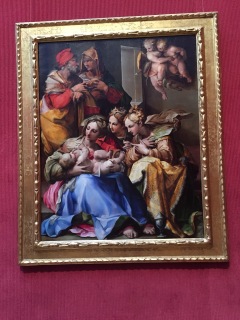 I thought this one had interesting symbolism 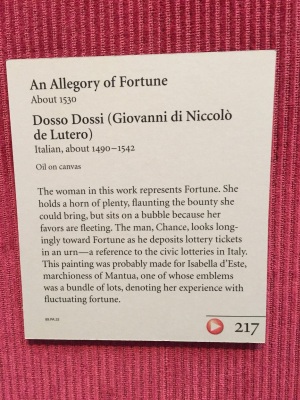 I stood in front of this one for a while. It made me cry. They are putting the crown of thorns on Christ and that man down below, bowing to him and mocking him… 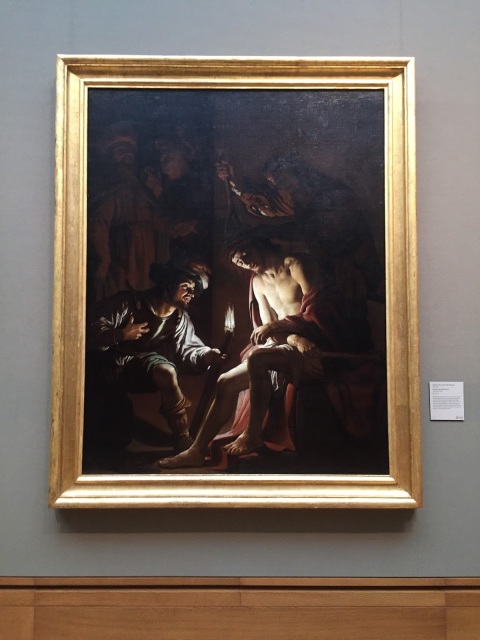 We finally got to the European artwork, which is my favorite, but our feet were getting really tired so we hurried.

I love any seascape. I also really liked this Dutch take on the Nativity setting. Isn’t that building beautiful? 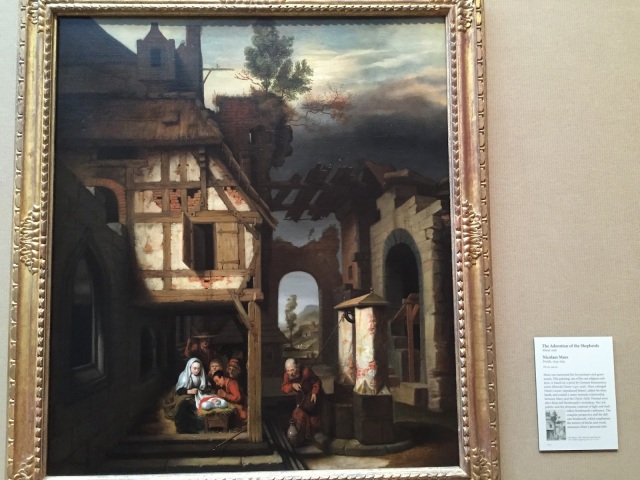 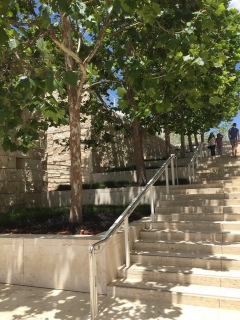 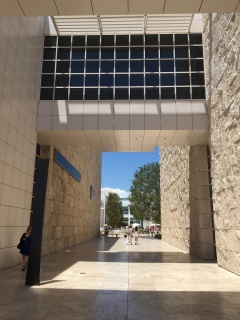 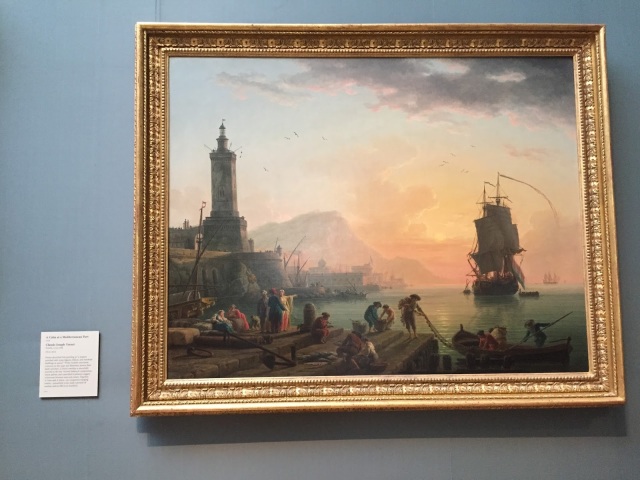 The picture above and below are of the same location in Venice. I thought it was neat that they were side by side, and so different. The one above has clean straight lines and a vertical feeling that has you looking up and down. It is a more architechture-focused scene. The second one (below) is more moody and catches the feeling of the light in Venice. With all the water in the air, there just seem to be a lot of colors everywhere, particularly in the evening time. It made me miss it and want to go back. I loved the museum! Next we went to Santa Monica pier which was way too crowded for our taste, but it seems like a fun spot. We had burgers and fries, got approached by a homeless woman, and took off for home in horrific traffic.

Just a quick overnighter! We are lucky we were able to have a few trips together this summer. We also had a small getaway in May with our friends Ana Maria and Ryan. I’ll have to write about that soon.