Rose turned 10 months last week. I cannot believe she is almost a year old. She is still very much my baby though. Some notable occurrences from the past month include:

-She drank juice from a bottle the other day!!! This is a HUGE milestone because this girl has been a breastfeeding fiend and has refused the bottle always. I am hoping to make a switch soon for my own sake. Milk in a bottle has been unsuccessful, but we’ll keep trying!
-She climbed up our very steep, very tall staircase! I had never even seen her even attempt it before! I went upstairs to put away some clothes, and about five minutes later I turned around and Rose was at the top of the landing! It was a very exciting moment, and we were both just smiling at each other! She was pretty proud of herself. She seemed too tiny to have been able to do that!
-She is getting very strong very quickly. She can not only stand up against things, but can also get herself back down now. It seems like she will be standing before we know it.
-She wrinkles her nose when she smiles. It is infectious.
-She is starting to get into things and makes a mess of the toilet paper on a daily basis. I have to watch her always. 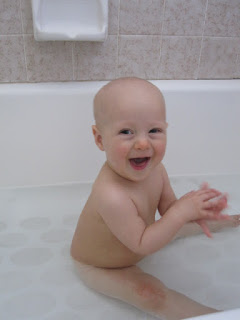 I took a ton of pics of her adorable toes! I can’t get enough of them!